Once upon a time there was a giant schnauzer named Emi. Emi was very curious about electric cars. She heard that they were much better for the environment than regular cars, and she wanted to learn more about them and maybe get one.

So Emi set off on a journey to Stuttgart, Germany, where she visited the Porsche factory.

She was impressed by the cars they make and how they work. She even got to sit in one of the cars and pretend to drive it. But when she found out how much they cost, she realized that her master, author of childrensbooks, could not afford one. She was so disappointed that she decided to go home.

But on the way home, she had an idea. She would convince her master to write novels instead of children’s books!

Emi was so excited about her idea that she could not wait to get home. When she arrived, she immediately went to her master’s study and told him about it. Her master was very interested in Emi’s idea but explained to her that the matter had a hitch.

Without a children’s book, Emi the Giant would not exist!

Emi was shocked. She had never thought about it and realized something important. She had a great group of friends, she loved her adventures, and had plenty of hobbies and interests to keep her busy. And suddenly, she realized that she was actually quite happy with her life just the way it was. She didn’t need an electro car or any other luxury item to make her happy.

So the next time her somebody brought up the topic of a fancy electric car, Emi just laughed and told them how happy she was to walk through life on all fours. And she meant it.

And the moral of the story, don’t dream your life – live your dream…

Out now! “The one where Emi is alone”

Emi the Giant – the one where Emi is alone – is a heartwarming story of a little giant schnauzer who overcomes obstacles with the help of her friends. 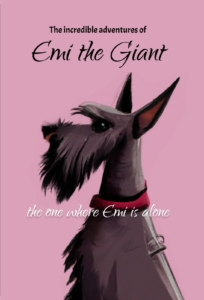 What readers are saying about the book

“This is such a great story with such a solid message. My nieces absolutely love everything about Emi and her Story. They can’t wait to hear more about Emi the Giant and her big heart. Perfect for any child who has an imagination and loves to read!”

“The book was really cute and fun to read. Would recommend this book to all readers. It is fun to read together or by yourself”

Mindy
“This one was just enchanting! My son loves it as much as my daughters. Wonderful”
Jenifer
PreviousNext
The long-awaited children’s book Emi the Giant is almost ready for re...